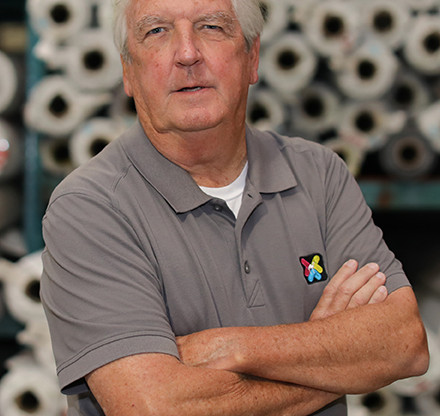 Danny Hoots received his Commercial Art & Advertising Design degree in 1970 and his first job in the industry, at Associated Posters, in 1971. Over the years, he worked with a few more printing companies but ultimately settled at Compton & Sons Lithographers in 1982 and spearheaded the start up of Unicom Poster Productions. It served as a fulfillment arm of Compton & Sons, serving national brands for outdoor advertising. Danny developed the business from the ground up, even sweeping and washing dishes when necessary as the extension business grew. In no time, they were printing and shipping ads for over 50 national co-op programs, including bigwigs like Chrysler, General Motors, McDonald’s, Wrangler Jeans, and more.

Unfortunately, in 1987 Compton decided they no longer needed Unicom. Danny was unsuccessful in buying the business, but he didn’t let that get him down. Instead, he went back to the drawing board and started Camel City Posters from the ground up. He takes great pride in what the company accomplished in the first 30 years. As it began with nothing and is now a multi-million dollar company that still prioritizes the success of the client. And he looks forward to what the next 30 years will bring for Camel City Posters.